In order to provide you with the best possible service, we use cookies. You agree with this through your visit to this website.
Back to 2 euro coins
Detailed description and specifications
Description

Emperor Charles V (Ghent, 24 February 1500 – Cuacos de Yuste, Spain, 21 September 1558) was a member of the House of Habsburg. During his reign, his empire grew into the largest European empire since Charlemagne. It covered all Dutch provinces, Spain and the Holy Roman Empire. As it also includes American and Asian territories, his Empire was even larger than the ancient Roman Empire. His reign marks the transition from the Middle Ages to the New Times.

Charles V is almost always depicted with the Distinguished Order of the Golden Fleece, the symbol of an exclusive order of chivalry. On his first birthday, Charles was admitted to this world-famous order of knights. After his father's death in 1506, Charles succeeded him as Grand Master. In 1516, he increased the statutory number of knights from thirty to fifty: ten new places for Spain as well as ten for Germany and the Burgundian Netherlands. This made the Golden Fleece the most important European chivalry order.
In 1521, Charles V introduced a golden guilder of 20 stuivers, a new unit of account: the carolus guilder. In 1543, a silver carolus guilder was also introduced. After the abdication of Charles V, the coins were no longer minted. However, the (carolus) guilder remained in use in the Low Countries for a long time as a term and unit of account.
On the right side of the coin is a bust of the emperor Charles V (Carolus V) looking to the left. He is wearing his typical Renaissance velvet beret and a fur-trimmed gown. Around his neck hangs the chain with the jewel of the Distinguished Order of the Golden Fleece. He is looking at the golden Carolus Gulden, the coin that is celebrating its 5th centenary. On the left is the designation of the country BE and the year 2021. Text: CAROLUS V. Below the mint mark of the Royal Dutch Mint (Staff of Mercury), the Belgian privy mark (the coat of arms of the municipality of Herzele) and LL (the initials of designer Luc Luycx). 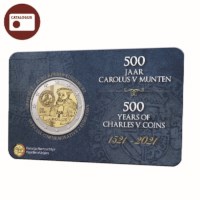 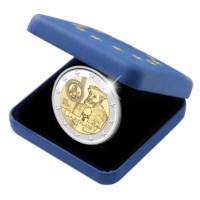 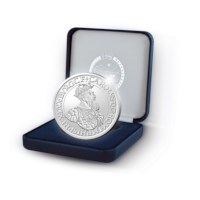 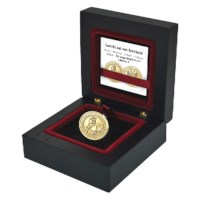 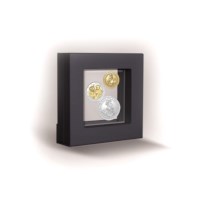