In order to provide you with the best possible service, we use cookies. You agree with this through your visit to this website.
Back to 2 euro coins
N.B. Maximum 10 pieces per person
Detailed description and specifications
Description

After seven years of waiting, a new and fifth common commemorative coin has finally arrived. The occasion is the 35th anniversary of the Erasmus programme, which recently received a plus sign after its name and is now known as Erasmus+.

What Erasmus+ has to offer...
Erasmus+ is the EU programme for education, training, youth and sport in Europe. Its main aim is to promote exchanges of students (for studies or work placements) and teachers. It was strongly inspired by the Rotterdam humanist Desiderius Erasmus who also visited several universities in his time. Every year, around a million participants from more than 30 countries make use of the enormous possibilities offered by Erasmus+. The programme has also been expanded considerably, as from 2014 it will give people of all ages the opportunity to gain new knowledge and experience abroad. So that plus behind the name Erasmus is indeed relevant.

Design competition
As was the case for the previous four common 2-euro coins, a design competition was organized for this fifth commemorative coin. The winning design, which won more than 20,000 of the more than 70,000 votes cast, was announced by the European Commission in April 2021 and is by Joaquin Jimenez, a designer at the Monnaie de Paris.

On the right a portrait of Erasmus with the dates 1987-2022 and the text “ERASMUS PROGRAMME”. In the centre the country designation “BE” and below it the initials of designer Joaquin Jimenez. On the left the number 35 in a tracery that symbolises the many intellectual and human exchanges between European students. At the bottom the mint mark of the Royal Dutch Mint (the Mercury staff) and the privy mark (coat of arms of the municipality of Herzele). 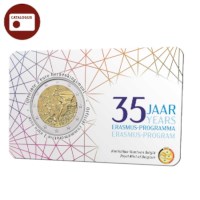 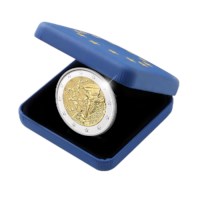 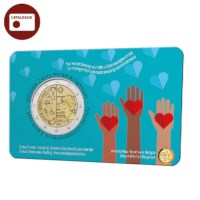