In order to provide you with the best possible service, we use cookies. You agree with this through your visit to this website.
Back to Other Countries
Available from the end of August
Detailed description and specifications
Description

The first Belgian train ride is of historical importance
On 1 May 1834, King Leopold I signed the law supporting the creation of the Belgian railway system. One year later, on 5 May 1835, the first Belgian railway line was opened. For the first time in history a train rode on the European mainland, between Brussels and Mechelen. Three steam locomotives, manufactured in Great Britain, rode in one line and transported 900 passengers in 30 carriages:

The route, which started from Brussels Groendreef station, was 22 kilometres long and had only one stop in Vilvoorde. On arrival in Mechelen, all the wagons were coupled together, and on the way back to Brussels they were dragged by L’Éléphant.
This route marked the beginning of the rich history of Belgian railways and was the driving force behind Belgium's industrial success in the 19th century.

Special and technical design
For the first time in Belgian numismatics the multiview technique was applied to a coin: different images are visible when the coin is tilted. The first train route between Brussels and Mechelen is visible, just as the names of the three locomotives from the first train ride and the current Belgian railway system. On the foreground of the coin it seems like the locomotive L’Éléphant rides out of the coin. The grid of the rails in the frame give the coin a sense of speed and movement.
Specifications
Related products 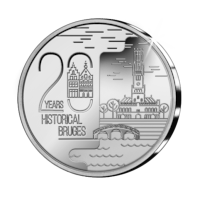 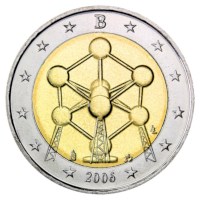