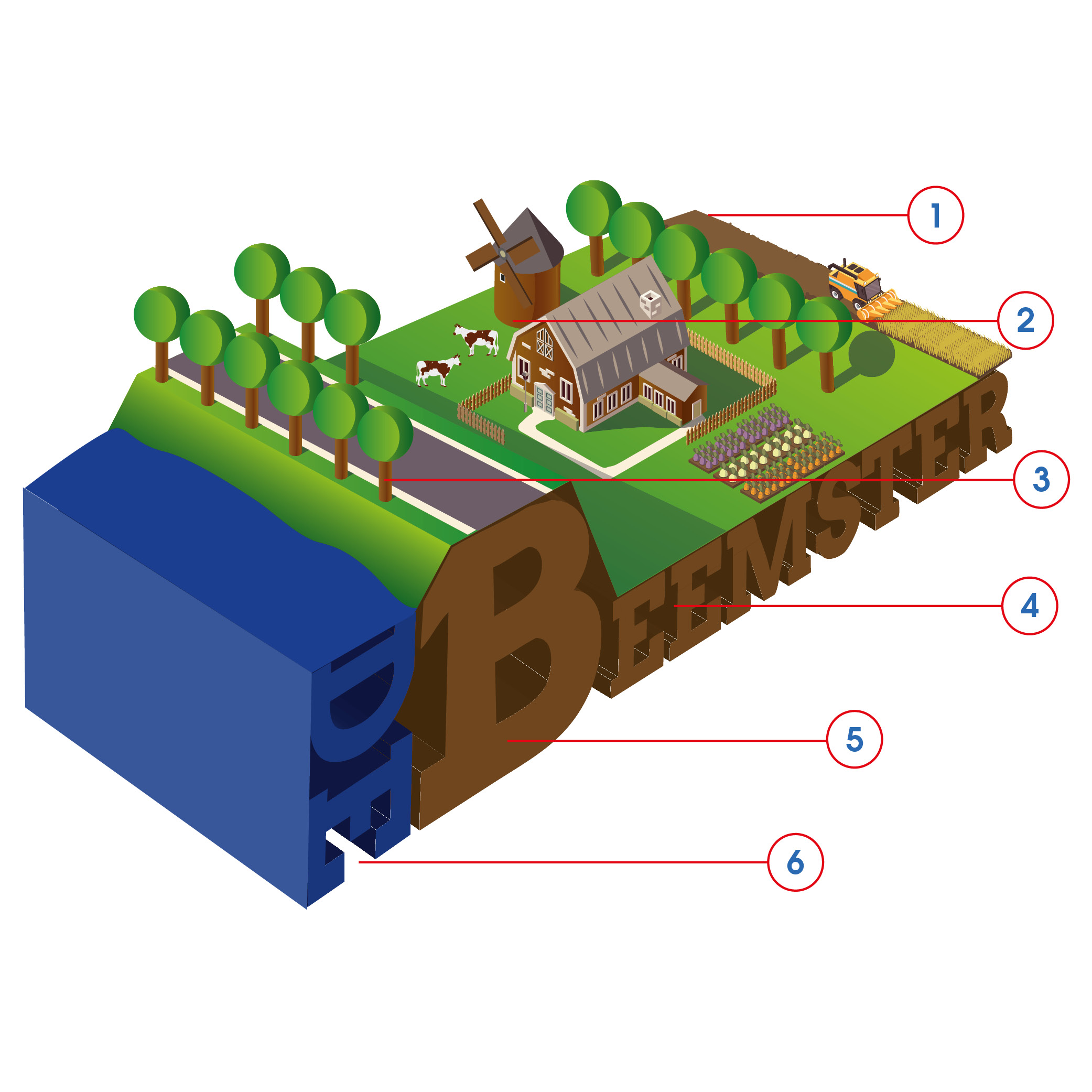 Every year, since 2012, special commemorative coins have been issued celebrating Dutch World Heritage. The Kingdom of the Netherlands currently has ten UNESCO world heritage listings, of which the Royal Dutch Mint has immortalized seven of them on a commemorative coin. Now, it’s time for number eight: The Beemster 5 Euro Coin!

On May 21, 1607, the States of Holland granted a concession for the reclamation of The Beemster. A 42-kilometer long dike and a ring canal were constructed around the wild Beemsterlake, after which more than 40 windmills began pumping the lake empty. After a major setback in 1610 - the lake filled up again after a breakthrough of the Zuiderzee dikes - The Beemster finally fell dry in 1612. Roads and rows of trees were laid, ditches and plot ditches were dug and bell-shaped farms were built. The layout of the new land was planned on the map according to a tight geometric pattern based on large squares. This example of spatial planning was of unprecedented scale - The Beemster has an area of ​​72 square kilometers – it made the new polder world famous. Here, people live and work below sea level and that is a strange idea for outsiders. The Beemster has therefore served as a model for many polder areas. Below, we have summarized what really encompasses The Beemster.
1. Agricultural land and livestock cultivation
The new agricultural land was sown with rapeseed in the first year after the reclamation. Later a substantial crop of wheat, barley and oats was also brought in. With the mills, however, the land could not be kept sufficiently dry. That’s why agriculture disappeared in favor of grassland and livestock cultivation. The cows on the green meadows of The Beemster polder deliver the milk for the famous Beemster cheese. In addition, the fertile Beemster clay lends itself very well to bulb cultivation. The tulip fields are a feast for the eyes from mid-April to early May.
​
2. Poldermills
At the beginning of the seventeenth century, the Beemster was still a big lake. In 1607, the States of Holland granted permission to create land out of that lake. With more than forty mills, the water was ground away. On May 19, 1612 the Beemsterlake was dry.

3. Trees
In The Beemster, a network of roads and ditches is set up according to a tight geometric grid. The long rows of trees along the roads emphasize the straight lines that cut through the polder floor. The plants consist of ash trees, poplars, elms and here and there fruit trees. The dikes are planted with trees, it clearly distinguishes The Beemster from the surrounding old land. From the air, the difference catches the eye immediately.

4. Landscape and layout
The Beemster has an area of ​​72 square kilometers and the lowest point is 3.9 meters below sea level. The pattern of straight roads and watercourses is unique. This seventeenth-century innovative and visionary landscape, with its orderly and sleek geometric spatial layout, had a major impact on other land reclamations, both nationally and internationally.

5. Dikes protect against water
In the spring of 1608, the construction of the 42 km long ringcanal and ringdike around the lake began. This work was divided into 400 sections, which were put out to tender. Everything was done by hand, of course. During a severe storm in January 1610, the dike broke and was destroyed over great distances. They could start again. In the lowest measuring area, the water in the ditches measures 5.0 meters below sea level. The residents can’t keep their feet dry without the dike and pumping stations.

6. World famous architectural landscape
The Beemster marks a crucial moment in landscape architecture. The spatial planning of the new polder was designed strictly on the drawing board based on principles of classical antiquity. A grid of large squares of 1,800 by 1,800 meters forms the core of that design. The result was a landscape in which utility, sustainability and beauty were combined into an unprecedented harmonious whole. The interior of The Beemster nowadays resembles the whole world. UNESCO awarded the polder for its unique and pioneering urban design in 1999 as a world heritage site.