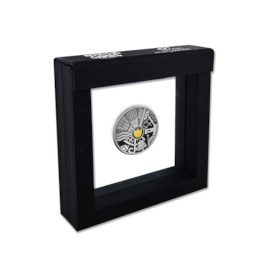 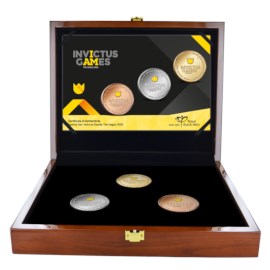 About the Invictus Games The Hague 2020

The Invictus Games is a sports event for physically and/or mentally injured soldiers. The Invictus Games uses the power of sport to support rehabilitation and generate wider understanding and respect for those who have served their country. “Invictus” means “unconquered”. It shows what you can achieve despite your

On the obverse you see the slogan “I AM”. This slogan has been used by the Invictus Games from the beginning and is taken from William Ernest Henley's poem Invictus, 1849-1903. The last two lines read:

“I am the master of my fate:/I am the captain of my soul.”

“Invictus” is Latin for “unconquered”. The speaker in the poem proclaims his strength in the face of adversity. “I AM” not only captures the spirit of Henley’s poem, but, most importantly, it reflects and defines the core purpose of the Games: to provide a platform for personal achievement, to compete not just against each other, but against yourself and to prove “I AM”.

The tulip is one of the symbols for which the Netherlands is best known. During the Invictus Games The Hague 2020, the tulip is also a symbol for the participants of the sports event. The tulip only blooms in the right environment. Every participant in the Invictus Games has their own story, but all have found the inner strength to carry on. Alone or with the help of family and friends, but always due to the power of sport.

Sporty Issues by Esther Bergé
Not only does the Royal Dutch Mint sponsor the medals for the Invictus Games The Hague 2020, two sporty issues are also included in the range. The issues are designed by our graphic designer and sports fanatic Esther Bergé. Esther was immediately enthusiastic when she heard about the collaboration between the Royal Dutch Mint and the Invictus Games The Hague 2020:

“When I heard that I had the opportunity to participate in this project, I really wanted to. I like sports and this event is really special. The people who participate have fought for their country, I think that's beautiful. I did my graduation internship at a military rehabilitation centre in Doorn, so I was already familiar with the Invictus Games.”

Esther herself is a fan of football, tennis, running and squash. After a number of sketches, she chose to depict the sports in such a way that they form a wheel together: “The wheelchair wheel of, for example, a participant in wheelchair basketball or wheelchair rugby. The Invictus Games The Hague 2020 tulip forms the axis of the wheel.” A conscious decision was made to keep the issue minimalist. On the reverse, therefore, only the official logo of the Invictus Games The Hague 2020 is depicted with the corresponding tulip.

The silver issue is coated with black platinum and the tulip in the middle is gold-plated, completely in line with the black-and-yellow style of the Invictus Games The Hague 2020. On the reverse, the letters “I AM” in the inscription “Invictus Games” are also gold-plated.