It seems like such a short time ago, but almost twenty years have passed since the Dutch guilder was replaced by the European euro. The Royal Dutch Mint has now restruck this nostalgic coin!  Via our website you could vote which guilder would be restruck. You voted en masse for the Willem I guilder from 1818.

The Guilder
The guilder, which was subdivided into one hundred cents, was introduced in 1816. However, the first guilder was not minted until  1818. On the obverse of this guilder, you can see the portrait of King Willem I, with the circular lettering 'WILLEM KONING DER NED. G. H. V. L.’ (Willem, King of the Netherlands, Grand Duke of Luxembourg). You can also see the anchor with lamp, the sign of the designer Michaut. On the reverse is the crowned coat of arms of the Netherlands with the nominal value, the privy mark of Mint Master Suermondt and the mint mark of Utrecht (the Mercury staff).

Packaging Manufactured by pastoe
The restrike of this special first guilder comes in a beautiful wooden box, including a Certificate of Authenticity. The box is made by furniture manufacturer pastoe. The Royal Dutch Mint and pastoe have a special similarity: both have been based in Utrecht for a long time and both have recently moved to newer premises in Houten. In fact: the Mint and pastoe are practically neighbours! A special collaboration for a special product. 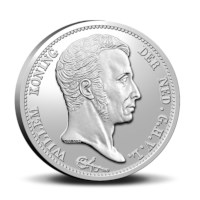 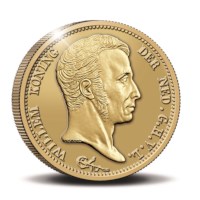