Design prince dollar
After the introduction of the lion dollar, Holland also came up with the need to enter a heavier rijksdaalder, a coin that would comply with the German laws at that time. The Baltic Sea trade also created demand for a better coin. The first emission of the prince dollar took place from 1583 – 1585. The original silver coin has an armored statue of Willem van Oranje on the obverse, he is carrying a sword in his right hand. The inscription contains the saying ‘Vigilate Deo confidentes’, which means ‘Watch, trusting on God’. The reverse contains a helmeted provincial coat of arms.  With the restrike, the year 2022 is also placed on the coin. The Prince Dollar in Gold 2 ounces will be delivered in a luxurious packaging, including a numbered Certificate of Authenticity.

Piedfort edition
The restrikes in Piedfort have the same diameter as the regular editions, but are minted on twice as thick blanks. Traditionally, Piedfort coins were minted to convey prosperity and power. In the sixteenth and seventeenth centuries, rulers gave these prestigious coins to their household as a gift. Today, Piedfort coins are real collector's items. These double-thick editions are extra limited and twice as special. 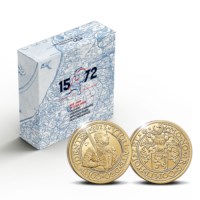 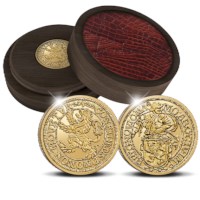