After the success of the previous restrike of the “Scheepjesschelling”, the Royal Dutch Mint is now minting this popular trade coin again! This time the Scheepjesschelling from Zeeland is being restruck, which dates from the year 1761. The “schelling” is an old silver trading coin, which was worth six “stuivers”. The Scheepjesschelling was created in 1670 because many inferior pieces of earlier schellingen were in circulation. The Scheepjesschelling has a ship on the front and the provincial coat of arms on the reverse. With this effigy, the Republic wanted to emphasize its status as a naval power. The coin quickly became popular as an international trade currency, especially in the East.

Piedfort
The gold restrike – Piedfort Edition has the same diameter as the original Zeeland Scheepjesschelling, but is twice as thick. Traditionally, Piedfort coins were used as a way of showing wealth and power. In the sixteenth and seventeenth century, rulers across Europe started the tradition of giving “prestige pieces” to members of their court. Nowadays, Piedfort coins are real collector’s items. This gold restrike of the Scheepjesschelling is twice as thick and therefore twice as special! It is limited to only 10 pieces worldwide, so don’t miss out!

Design
The front of the Scheepjesschelling shows a warship with a flag on the stern and the inscription “ITA. RELINQUENDA. UT. ACCEPTA.”. This proverb can be loosely translated as “Leave it like you got it”. The reverse shows the provincial coat of arms of Zeeland and the inscription 'MON. NOV. ARGEN. ORDIN. ZELAND.”, in full MONETA NOVA ARGENTEA ORDINUM ZELAND. This means: New silver coin of Zeeland.

In Beautiful Earthenware Coin Holder
The golden restrike of the Scheepjesschelling can be found in a unique earthenware coin holder, developed in collaboration with Royal Goedewaagen. The wavy shapes at the top are a nod to the connection of the Scheepjesschelling with the sea. On the bottom you can see the logos of the Royal Dutch Mint and Royal Goedewaagen. With this special coin holder you can certainly display the coin beautifully. The issue comes with a numbered Certificate of Authenticity. Order quickly, there are only 10 pieces available! 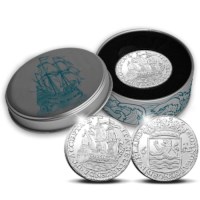 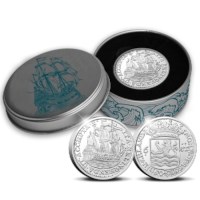 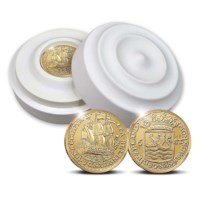