In order to provide you with the best possible service, we use cookies. You agree with this through your visit to this website.
Back to Ducats
Detailed description and specifications
Description

The design
The trusted international trade coin is engraved with a historical image: a knight in armor with arrows, designed by engraver Johan Willem Marmé. From 1763 until 1795, Marmé worked as engraver of the provincial and urban Mint of Utrecht. On the obverse of the coin the Latin phrase Concordia Res Parvae Crescunt is engraved: “Small things flourish by concord” or better known as “Unity makes Strength”. On the reverse the Latin Mo. Aur. Reg. Belgii Ad Legem Imperii is found: “Gold coin of the Kingdom of the Netherlands by law of the Empire”.

Discover the Wine Trade!
Discover the wine trade! Wine has been traded with the Baltic Sea region since the late 16th century. On the Golden Ducat you see the wine trade depicted in the shape of a bunch of grapes. Wine is one of the first commodities traded during the time of the Golden Ducat. Holland brought French and Portuguese wine to the Baltic Sea region and received wood, grain and salt in return. With the goods and wealth that Holland gained from this lucrative trade, they were able to expand the Dutch East India Company and build ships to further strengthen their trading position. That is why trade with the Baltic Sea region is also called the mother of all trade: it was the beginning of great prosperity and flourishing international trade in Holland. 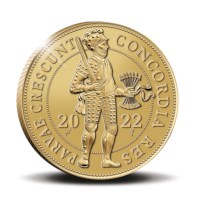