Design
As a tribute to his impressive career, the Royal Dutch Mint designed a special Gold issue with special packaging, in collaboration with the Sven Kramer academy and Team Jumbo-Visma. The packaging of the Gold 0,5 ounce medal refers to the impressive skating career of Sven Kramer. This packaging is a reference to the many ours Kramer undoubtedly spend on the skating rink. The stripes are to be recognized by everyone that ever skated: the sharp iron blades leave stripes on the rink. In the middle of the ‘skating rink’, the Gold medal is placed. The packaging of the Sven Kramer Medal Gold 0,5 ounce is numbered.

The obverse of the medal consists of several elements. On the top right of the modal is the portrait of Sven Kramer. On the left side, you can find a skating figure, referring to the successes Sven Kramer achieved in his career. On the bottom left is the name ‘Sven Kramer’. On the bottom you can see five skating figures, a reference to the achievements Sven Kramer accomplished with his team. Around the obverse of the medal, little skates are pictured. On the reverse you can find the logo of the Sven Kramer Academy, but also the privy mark and mintmark. 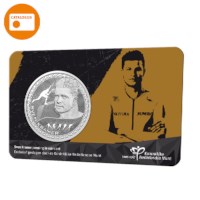 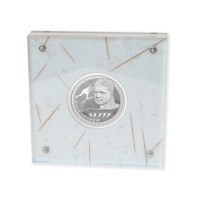 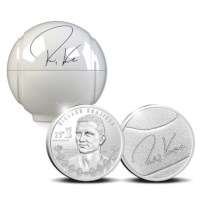 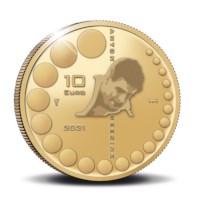