In order to provide you with the best possible service, we use cookies. You agree with this through your visit to this website.
Back to Medals
Uitgebreide omschrijving en specificaties
Beschrijving

This medal tells the story of 70 meaningful years of the Dutch Cancer Society (DCS), founded by Queen Wilhelmina founded in 1949. This foundation is committed to find ways to have less cancer, a better healing process and a better quality of life for people who have (had) cancer. Patients, collectors and researchers are featured on both sides of the coincard. These groups combined make it possible to reach the goals of the DCS. Together, we’re getting closer.

Obverse
Queen Wilhelmina’s portrait is featured on the obverse of the coin. This image is based on the guilder with her likeness. The description on the coin says 70 JAAR KWF KANKERBESTRIJDING / KONINGIN WILHELMINA (meaning: 70 YEARS DUTCH CANCER SOCIETY QUEEN WILHELMINA), surrounded by an ornate ring.

Reverse
The Dutch logo of the DCS is featured on the reverse, inside a growing shell, which represents growth and life. The Mintmaster privy is also featured.

Ceremonial Strike
The ceremonial First Strike was performed in 2019 by HRH Princess Beatrix, patron of the Dutch Cancer Society, on her grandmother’s, Queen Wilhelmina’s, birthday: August 31st. The ceremony took place in front of people who have or had cancer, cancer researchers and multiple generations of collectors. 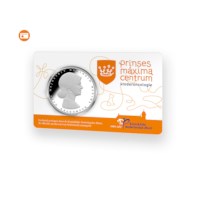 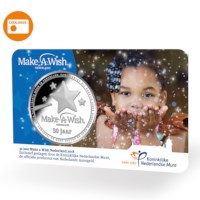