In order to provide you with the best possible service, we use cookies. You agree with this through your visit to this website.
Back to Home

About the Dutch Golden Ducats From 4 August 1586 onwards Golden Ducats are registered in the Dutch Mint Act as trade coins. The Golden Ducat finds its origin in the Republic of Venice and was later also minted in the Netherlands. The Golden Ducat has always been strong currency; for centuries these coins were important tender in international trade. Their reputation was strong because of their dependable content and weight. In Scandinavia, Poland and Russia the coin was gladly accepted and also in Asia the coin was often used in trade. The Dutch Golden Ducat therefore became one of the most important trade coins in the world. The Royal Dutch Mint annually mints Golden Ducats on behalf of the Ministry of Finance to remember their rich trade history.

Take a look at our video to learn more about the history of the Golden Ducat as a trade coin (the text continues under the video):

Discover the history of the Dutch Golden Ducats

The richly decorated Golden Ducat has remained the same for almost 400 years, except for some small changes in its sublime details. In the course of the centuries small changes have been made to the knight’s armour and the decorations on the reverse that were subjected to “fashion”. The reverse of a Golden Ducat always has the same inscription in Latin: Mo. Aur. Reg. Belgii Ad Legem Imperii: “Gold coin of the Kingdom of the Netherlands by law of the Empire”. The lettering on the obverse reads Concordia Res Parvae Crescunt: “Small things florish by concord”, also translated as “Unity makes Strength”. The phrase can also be found on the Silver Ducats.

The obverse is also abundantly decorated: beautiful acanthus leaves and shells are recurring ornaments on the Golden Ducats in this series. Up and until 2021 we will discover four international trade routes according to the cardinal directions. The design of the obverse therefore shifts each year: previous Golden Ducats showed the wheat ears in the North, the Dutch East India Company (“VOC”) ship in the East, and a gold bar from the South.  In 2021 the West will be the last in the series and bring the Golden Ducat home. The elegant sign in the western corner of the Golden Ducat originates from the Dutch Act of 4 August 1586, which depicts the first drawing of the Golden Ducat. A new act was usually printed on a large piece of paper and hung in a central spot in town to announce new laws to the public. The new acts were sometimes also printed in little books. In Dutch, both posters and little books containing ordinances were called “plakkaten”.

A new knight inspired by the design of Johan Willem Marmé
Besides the decorations and the inscription, the obverse of a Golden Ducat always depicts a knight with sword and arrows. In 2018 a new knight appeared on the Golden Ducat for the first time in 32 years. Just like in the past, small changes were made to the design by Johan Willem Marmé, who worked at the provincial and urban Mint of Utrecht from 1763 until 1795. His design is characterised by precisely placed and detailed small buttons on the knight’s armour, known as “knoopjes” in Dutch.

The small buttons are of great importance: they are used to stop and recognise counterfeit Golden Ducats. Imitations of Golden Ducats can be found in the whole world. In Russia and Germany the government even ordered imitations of the Dutch Golden Ducats themselves. In Russia, the coin was in such high demand that millions of copies were minted in Saint-Petersburg in 1868 that cannot be distinguished from the original Utrecht coins.

In Marmé’s time all coin stamps were hand made; it was therefore of utmost importance that all stamps were identical so that all coins of the same type looked exactly the same. Marmé’s files tell us that he recorded the number of small buttons on the knight’s suit to the smallest detail. These detailed descriptions were most likely not only used for the benefit of recreating the stamp when it needed replacement, but also served as a tool to secure the authentiticy of a Golden Ducat. 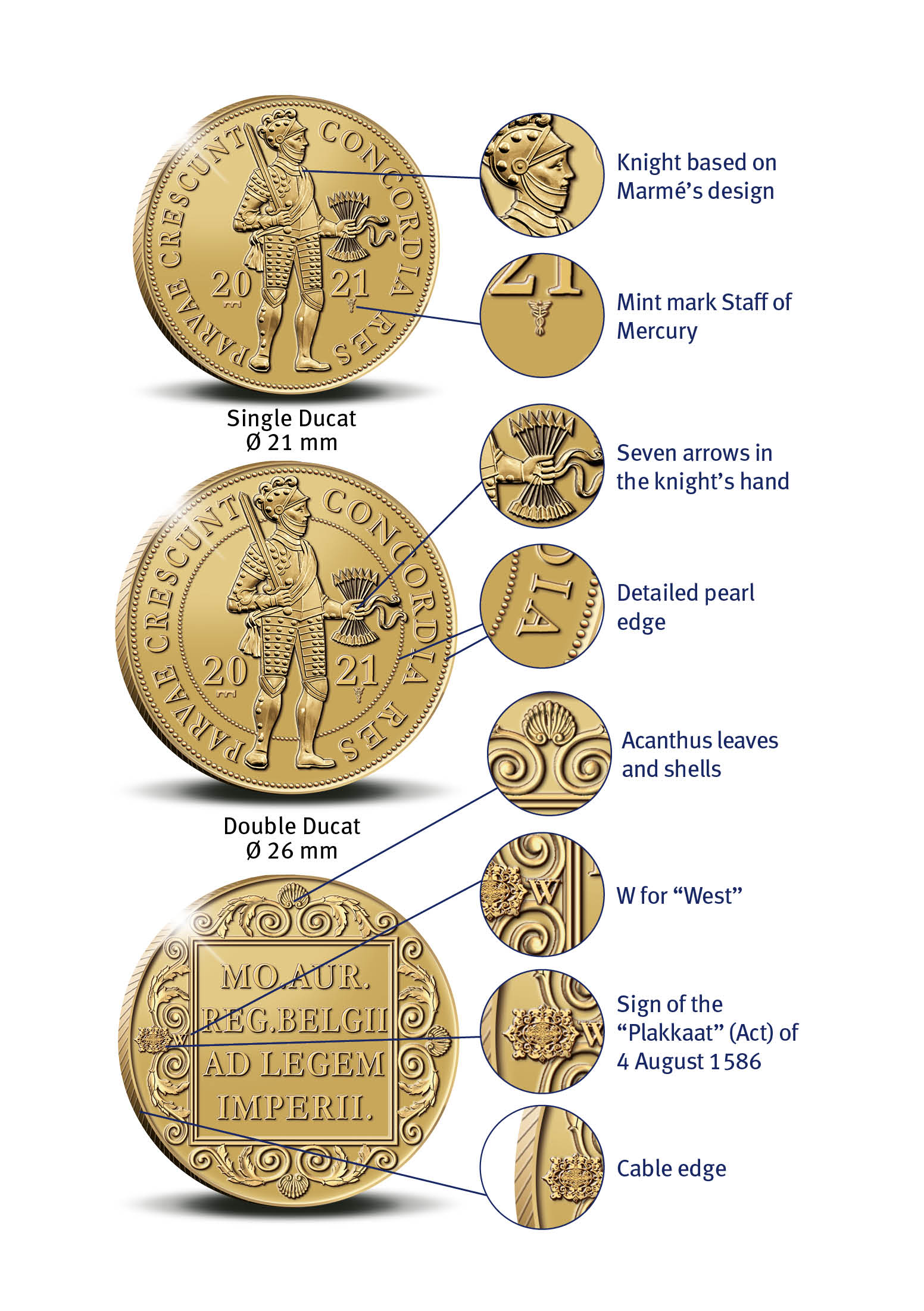 The Golden Ducat was not only subjected to imitations and counterfeiting, privateers and pirates were also after the coins that were found in great numbers on the ships of the East India Trading Company. Golden Ducats were used to pay for the goods and spices that were traded in Asia: Europe showed great interest in Asian goods but the other way around this certainly was not the case. Treasure chests filled with coins were found on the ships to finance the traded goods.

Although the words ‘privateer’ and ‘pirate’ may not sound so different today, in the Golden Age these were very different professions. Other than piracy, privateering was legal. A sovereign or delegated authority issued commissions (a permission slip) to the privateers, who in return shared (a part of) their profit. Pirates lacked permission and, other than privateers, therefore also attacked ships from their own country. Money was more important than where it came from. One could even argue that any silver or gold coin could have been in the hands of a pirate at some stage during the Golden Age! Learn more about piracy and trade coins in the Golden Age.

All issues of the Golden Ducats are subject to commission by the Ministery of Financy.